The Meteorology behind the 24 August, 2011, SW Ontario Tornadic Event

Both were tornadic, and both had similar synoptic scale upper-level patterns. Some of the differences included the mesoscale surface pattern and the reactions of the general public, both before, during and after the events.

This time we take a proper top-down look at the setup.

On the morning of the event there is again an approaching upper level jet max, rotating around a large, long wave trough:

At both levels the nose of the jet was a little further north than on 21 August.

We se a similar evolution at 500 mb, with a speed max approaching the Great Lakes in the morning from the NW (similar to 21 August):

and an almost SSW flow at 925, out ahead of a sharp short wave trough running roughly from N Lake Huron – Chicago – St Louis:

And finally at the surface we see a good SSW flow with Dewpoints in the high 60’s to low 70’s over S Mi and SW ON.  Interesting to note that the more generally more tornadic-favorable smaller Temperature-Dewpoint spreads were in place over SW ON.

A surface short wave trough was in place with its axis running through  Lake Huron and the Thumb of Michigan:

So, aside for a somewhat similar upper-level synoptic pattern in the morning of the 24th, we see a much different mesoscale setup throughout the troposphere.  24 August was much closer to being a synoptically-evident severe weather setup.

This was also reflect ed in the derrived indices (contrast these with some of the values shown for the 21 August event).

Significant instability was in place over lower S MI and W SW ON – SBCAPE:

Cape density was favorable, with 0 -3 km CAPE along and out ahead of the 925 mb trough:

Sufficient 0 6 km shear was in place for Supercells over S L MI and SW ON:

Low-level Lapse Rates were better than on the 21st:

…as were mid-level Lapse Rates

With similar values for 1 km EHI:

So we had strong indication of severe weather potential both in the raw data diagnosis and with the derived indices guidance – this event was not going to be a surprise.  EC has a Tornado Watch out early and the media were almost in hype-mode (for Ontario) – people were aware (and it might be safe to assume, many in Goderich were scared).

As expected, there was rapid development of isolated severe storms over SW L MI.  One cell north of Port Huron/Sarnia showed rotation from some of the earliest scans and was TOR waned by the Detroit NWS office.

Notice how the rotational couplet (as depicted by the adjacent red and green gates) and the reflectivity hook echo were in the NW quadrant of the storm!!  And storm motion for the observed Supercells was to the East – matching the Bunkers-Method predicted movement (see SRH charts above).

From a chaser perspective this was not good. Other storms formed over the lake and over SW ON and showed some rotation, but clearly this was the storm of the day, as it showed persistent rotation all the way across Lake Huron and into SW Ontario.  Here is the Mesocyclone about to move on-shore SW of Kettle Point:

This cell was latter confirmed to produce a 10 km weak Tornado that affected the small village of Narin, which is just S of Ailsa Craig – note the adjacent red and green bins – that is right over Narin!

I have yet to hear of anyone who even saw, let alone photographed this tornado – and there were a lot of folks watching the storm (other chasers, locals, and even the Canadian Weather Network) – it is possible that the tornado was rain-wrapped for much of its life-cycle (and the generally ‘messy’ reflectivity patterns exhibited by most of the cells would support this notion).

The cells evolved into a more linear mode over time and produced a lot of intra-cloud lightning, wind and, heavy rain.

Another Weak tornado was confirmed by EC, and it occurred, further to the East, near Cambridge, ON after dark.

And as for the chasing – out of two ‘big’ days in S ON terms that ultimately frustrated – I got one photo I am happy with: 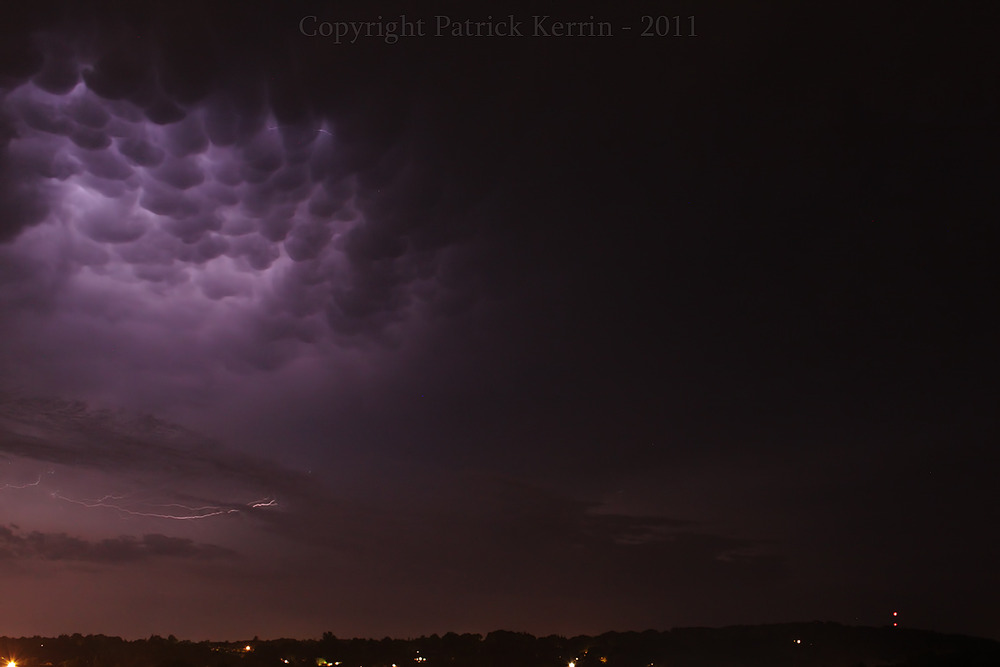